Back by popular demand! We are excited to welcome back UNC alumnus Scott Maitland (JD ’95), owner of Top of the Hill, for a fun and casual night of cocktails and stories about Chapel Hill and Carolina. Scott’s presentation will include a cocktail demo of a new TOPO recipe (see below), and we invite you to participate along. As we enjoy our beverages, we’ll “open the floor” for questions.

Directions: Combine all ingredients in a shaker with ice and shake well. Strain into a chilled martini or couple glass, garnish with a small spring of basil. If you don’t have a shaker, put all ingredients with ice in a pint glass, and stir well. This cocktail can also be served over ice in a rocks glass.

**To make basil syrup: Combine 1 cup of white sugar with 1 cup of water, and bring to a boil, stirring often. Reduce to a simmer, and add 10 large basil leaves. Turn off heat and let the mixture sit for 30 minutes to cool. Strain out basil leaves and put syrup in an airtight container. This will last for 2 weeks refrigerated. 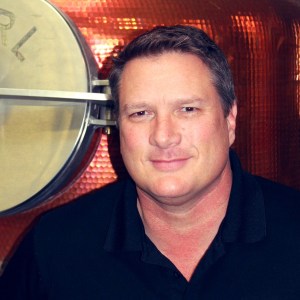 Scott Maitland is a 1988 graduate of the United States Military Academy at West Point. He served as a Combat Engineer Platoon Leader in the First Gulf War where he was awarded the Bronze Star. He was Ross Perot’s Presidential Campaign Manager for the State of Florida in 1992 and came to UNC Law on a Chancellor’s Scholarship the same year graduating with honors in 1995.

He conceived of Top of the Hill during his second year in law school and geared his third year in law school around the project.  Micromanagers, LLC dba Top of the Hill was the first LLC to do a registered offering in North Carolina and its original Founders Club offering served as a case study for North Carolina securities law CLE’s for many years.

Top of the Hill Restaurant & Brewery finally opened in 1996.  It is the fifth oldest brewpub in North Carolina. It has won over 70 Best of the Triangle Awards ranging from Best Microbrew to Best Outdoor Dining to Best Place to Watch a Game. In 2010 Top of the Hill launched the Back Bar and Great Room which made Top of the Hill the second largest independent restaurant in the state at that time.

In 2012, Top of the Hill Distillery – makers of TOPO Organic Spirits –  opened for business in the former Chapel Hill News Building (now Booze Building) on West Franklin St.  It was the first organic and locally sourced distillery in the South.  At one point, TOPO Vodka, Piedmont Gin, Eight Oak Carolina Whiskey and Moonshine Carolina Whiskey was distributed in over 10 states and Canada.

Scott is married to the former Ashly Blalock of Chapel Hill and they have three wonderful kids – Kaylee (11), Austin (9) and Andrew (5).